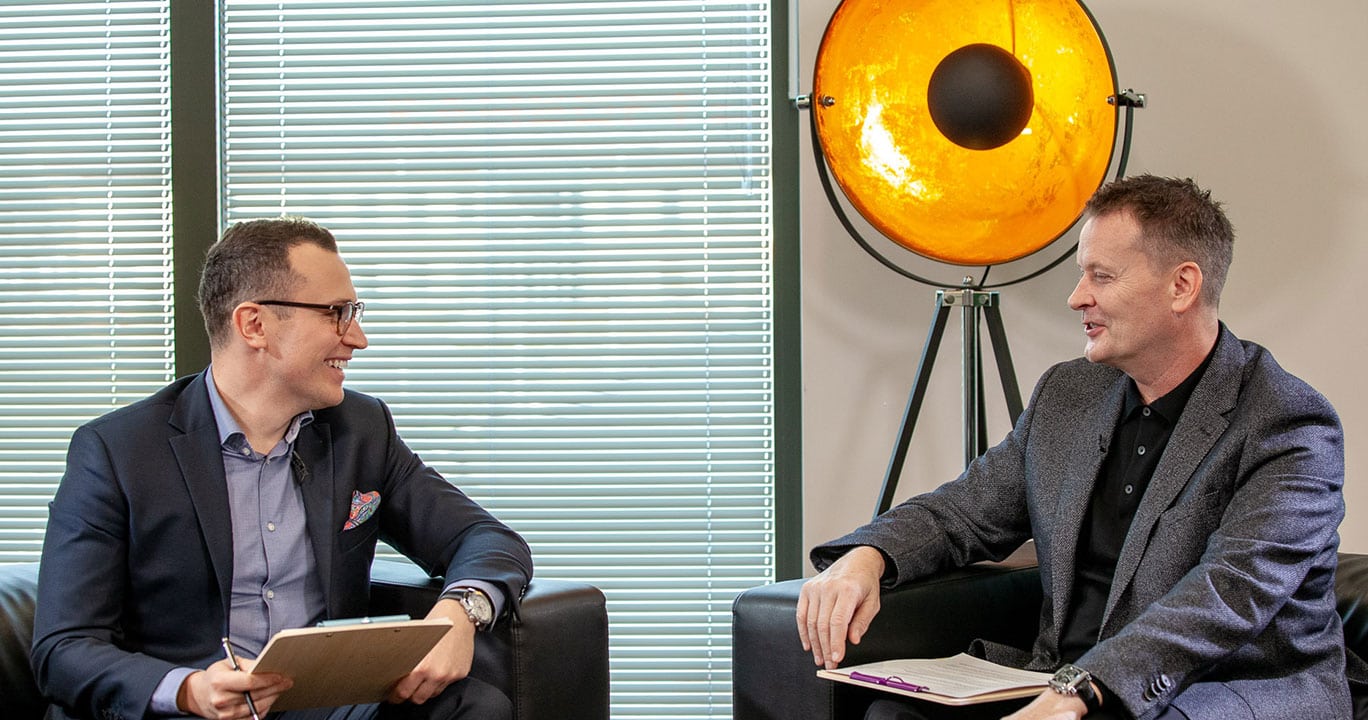 In many industries, including IT outsourcing, marketing may show a somewhat exaggerated image of a product or service. So how do you cut through the sugar frosting and find a real gem of an IT company to partner with?

In this episode of IT Leadership Insights, Michał Grela and Tom Quigley discuss the subject of marketing in the IT outsourcing industry. From this episode you’ll find out some marketing tricks used by some outsourcing companies. You will also learn a few tactics to help you avoid being misled by marketing and ensure you end up with a good quality technology partner.

Tom Quigley has spent 20 years working as a marketer in the outsourcing industry; initially for one of the largest BPO providers in the UK, then as marketing director for the Global Sourcing Association, before setting up his own marketing agency servicing CEE businesses. He is also the former CEO of Emerging Europe Alliance, a member coalition for innovation and technology companies, and sits on the International Association of Outsourcing Professionals’ (IAOP) European Outsourcing Council.

Michał Grela is Future Processing’s Relationship Manager, working within the marketing department to establish and nurture relationships with prospective customers and expand the company’s network of contacts. He strongly believes that business is about people and that, at the end of the day, it’s all about Human-to-Human rather than Business-to-Business.

Michał Grela (MG): Hello and welcome to IT Leadership Insights by Future Processing. This programme is for CIOs and Senior IT Executives, who struggle with current IT, and are considering nearshoring as a solution. We talk with industry’s experts to gain the perspectives and insights on how to do IT Outsourcing right.

Today, my guest is Tom Quigley, the CEO of Emerging Europe Alliance for Business Services, Innovation and Technology and the Chief Marketing Officer of Quigley Media, a marketing agency, from the UK. Tom, in our last episode together we spoke about various associations which client companies could use to find an IT nearshoring or outsourcing partner.

But apart from your work, in international associations, I know you are also a very experienced marketer. And today – that is why – I would like to talk to you about the marketing in the area of IT Outsourcing.

So Tom, how do IT outsourcing companies use marketing? What tools do they use?

Tom Quigley (TQ): So I think they’re becoming increasingly similar in the tools that they use. And I don’t think it’s just specific to IT companies necessarily. But these days, businesses need to be multi-channel, they need to be 24/7. They need to be on around-the-clock. And a lot of IT companies I see deploying those similar tactics. So they go online, they might have print publications, they produce whitepapers, they produce infographics, they come along to events, they do webinars, so there’s lots of different ways that they use to try and engage and it makes it quite interesting, but I think the problem is that there’s very few of them that are truly authentic and I think that’s where they fall down on.

MG: Okay, so there’s a variety of things that outsourcing companies actually do in terms of marketing. But, as with marketing in any other industry, it often shows an exaggerated image of the product or service of the company. In advertising, or in marketing, everything is covered with sugar frosting. So what are the tricks that companies actually use marketing-wise in the area of IT outsourcing?

TQ: Well, I’ve seen a couple of good ones, particularly in businesses which operate offshore, all we have to do is go in and look at their website and you can see that their websites are quite, they’ve been painted over, they’re quite glossy, they make themselves out to be an organisation which is based in New York, or the Centre of London. And in actual fact when you lift the hood, they’re actually based in India or in Central Eastern Europe or something like that.

They also typically say that they have access to hundreds of a particular set of skills, and then again once you take a closer look, quite often there is maybe five or six of them and they’re, increasingly a kind of start-up organisation.

And they also like to talk about all the clients that they have had as well. When again, you might find that they’ve probably only have done a small piece of work, been part of a larger team for that and they have not fully delivered a full piece.

MG: So there’s this whole impression that they are creating, but in fact they are only like, three students in a garage.

MG: But what about the later stages of cooperation? Say, companies that promise to agree to everything, without objecting but, well, saying they can do anything, but actually they can’t. Did you also come across these kind of things?

TQ: Well, I think that’s where they fall down, and by then a lot of money has been spent, a lot of effort has been put into it, and a lot of time has been wasted. And that used to be the case in countries like India, who culturally didn’t like to say ‘no’ to things. They liked to overpromise, and quite often they under-delivered. You’re gonna go a lot further by being authentic, and talking about what you actually can do, and then make sure that you do deliver off the back of it. I’ve seen so many companies fall by the wayside because of that. And their reputations have been damaged irreparably.

MG: Well I’ve also heard that often you speak or negotiate with the big fish or are discussing senior programmers for the project but at the end of the day you end up with the juniors only, never see the big boss again.

TQ: Yeah, yeah, I’ve heard of that happening as well and it’s very difficult for an organisation, the end user, to be able to spot that upfront. There’s usually somebody fairly senior who comes in at the beginning. And then somewhere along the relationship timeline, they disappear, and then you are left with fairly junior people.

MG: So how do you spot all of these marketing tricks upfront? How do you deal with this, how do you mitigate?

TQ: I think it comes down to undertaking a degree of due diligence, I don’t think you have to look too far under the bonnet or scroll too far down a company’s LinkedIn profile to see how much thought leadership they’re actually putting out. Or look on their website and see how many white papers they’re actually putting out, or how many events they’re speaking at. I think that’s where they fall out. Social media these days has made everything so much more transparent, and it’s very difficult for these companies who present themselves as being something else to keep that momentum going for a length of time.

And I think it’s just by, checking out these hygiene factors, having a conversation, a face-to-face conversation; so looking them in the eye.

I would also recommend that they ask for sample code, so that they can test that themselves and see whether that works. And get the coders and the developers into the organisation as well so that you can speak to the people at the front line who are actually going to be delivering the service to you. And make sure that there’s a cultural alignment there, that they absolutely understand what it is you’re looking for. And that they’re vested in that relationship as well.

MG: What about visiting them, or checking out the reviews on Clutch, or contacting the previous customers?

TQ: Absolutely, I mean I think what I’ve seen some IT companies actually do is they have started to create their own IT academies, of end users. where they use that as a platform to share knowledge and expertise, but they also give these businesses the opportunity to talk to each other, about the services that the service provider is providing for them and that can be a very very strong advocate for you.

MG: Okay, so Tom, just to summarise, what would be your top three things IT executives should be aware of to avoid being misled by marketing when choosing an IT partner?

TQ: I think there’s probably a lot more than three that they could probably look to deploy and I think the first one is around exercising a degree of due diligence. So I don’t think it takes a lot of effort to take a closer look at their website, their LinkedIn profiles, understand exactly what content they’re putting out. Are they true thought leaders? Are they producing whitepapers? What value are they creating for their customers? What events are they speaking at? What member associations are they part of as well because usually all the best ones are involved with them at some extent.

Having a look at platforms like Clutch, where you can see other users who might have used their services and you can see the feedback that they have from that.

And ultimately, getting them into a room. Sharing your requirements with them, and asking them to come up with three or four proposals, as how they can help you and deliver against those requirements. I think that quickly separates the true businesses who have that type of capability, from the ones who are trying to punch above their weight.

I would ask for samples of their code, as well so that you can check that and make sure that that’s up to speed, and then ultimately go and visit them in their offices as well and speak to their people, and not just the senior management team, but the people at the grass roots. The people who are actually doing the coding for you or delivering the service for you, and making sure that there is a cultural fit within that as well.

MG: Thank you, that was a great summary. Thank you for this conversation, it was very interesting, and I’m sure it will be very helpful to those IT executives who are actually struggling with choosing the right partner right now. And thank you, our viewers, for watching this episode of IT Leadership Insights, by Future Processing. If you have found it useful, please do not hesitate to share it on LinkedIn and Twitter, and please do drop us a line if you would like to have a topic covered, in one of the future episodes. Thank you for watching IT Leadership Insights by Future Processing. See you in the next episode.