5 reasons to outsource in IT 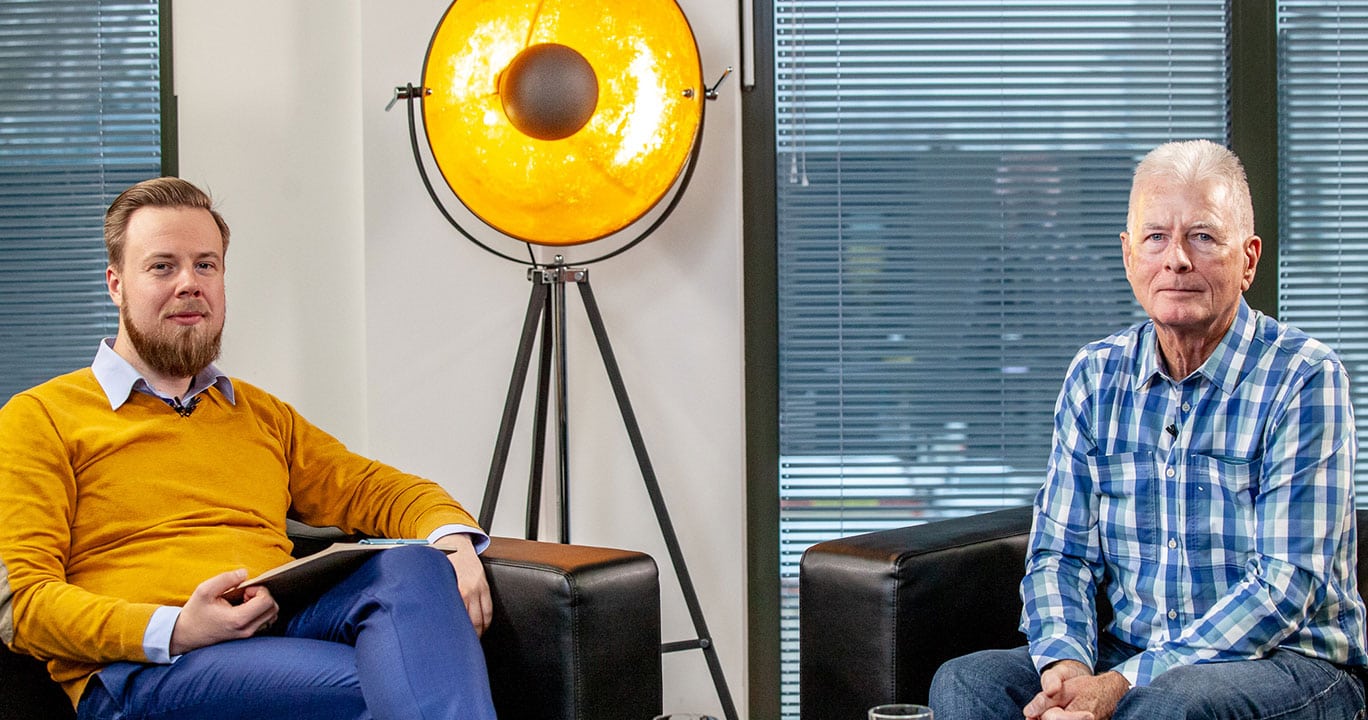 In this episode of IT Leadership Insights, Jarosław Granat and Ross Morrell discuss top reasons why UK companies decide for IT outsourcing.

Why do UK-based companies outsource their IT? Based on his experience of 40 years in and around IT, our guest, Ross Morrell, shares his thoughts on the most common reasons to outsource software development. Ross categorises them under five useful headings and provides examples for each.

Ross Morrell has spent 40 years in IT sales up to director level for global corporations delivering IT and BPO services. His client base was predominantly large banks and insurance companies, but his last role included managing very large public sector outsourcing contracts. Although Ross is based in the UK he has, at different times, been based in and responsible for activities in Europe, the Middle East and North America. So, his experiences span many different market requirements. Following life with large corporates Ross has aligned with several associates to offer advice and practical support to IT companies who are targeting the mainly SME sector.

Jaroslaw Granat is Future Processing’s Head of Client Engagement, working to ensure the highest level of services for the company’s clients. He is a graduate of Computer Sciences and Psychology in Business and has worked in IT for the last 10 years.

Jarosław Granat (JG): Hello and welcome to IT Leadership Insights by Future Processing. My name is Jarosław Granat and today, our guest is Ross Morrell, Director of Target Services, a business consultancy from the UK. Hello, Ross and thank you for joining us.

Ross Morrell (RM): Hello Jarek and thank you for asking me.

JG: Ross, in our previous episodes together, we learnt that you have massive experience on the UK nearshoring market, on the IT industry and you have worked with plenty of nearshore companies, is that right?

JG: So, based on your experience, what are the reasons that UK based companies even decide to outsource?

RM: Well, if I’m looking back Jarek at the numbers of contracts, outsourced contracts, I’ve been involved in, I would say that we can categorise them on the several key headings. So, for example, capability. Now, by that, I mean that I once had a director of a very large bank telling me that if it was easy, we’d do it ourselves. So, not every in-house IT department thinks they can do everything. And that can be for several reasons. In-house IT doesn’t have the same incentive or the same opportunity to get the skills on new and emerging technologies, for example. Whereas, for an outsourcer, that’s core to their business. Or perhaps, they don’t have the experience in using new methodologies like Agile, which again is something that is much more central to what the outsourcer offers. So, those are some of the reasons that companies will look outside of their own in-house department. But, what I’ve seen is the opportunity for a very valuable partnership because even though they accept they don’t have the technical skills to do something, they do have, perhaps, BAs with absolute intimacy of their business and they do have technical people who fully understand the technical environment for inter-operability. So, together, by putting those together with an outsourced partner, they’ve got a very powerful team of capability. So, they can solve the problem very easily and very quickly, by looking at that and there was many examples where I’ve seen that happen. Another one, which is pretty obvious, but it’s becoming, actually, more obvious is availability of resources. Now, it’s not just the fact that, I think, in a previous video we’ve talked about the factors that are making it very difficult to get good quality resources in the UK. Not just in the UK but in particular parts of the UK which makes it even more difficult. But, I think it’s also true to look beyond that and see that a lot of businesses spend, in-house departments, IT departments spend 70% of their time just keeping the lights on, on the current applications that they’ve got. So, they don’t have the capacity that you’d think to actually undertake new developments.

JG: I’ve noticed that for plenty of our clients, it’s, even they have troubles to attracts the young people because it’s not attractive for them to work, not in IT company, where IT is just a part of the business not the core business.

RM: Well, absolutely. Bearing in mind that some of these systems can be very old, it’s not attractive from the point of view that they’re not learning anything new that’s valuable to them either. So, it becomes a little bit of a fraught problem for everybody.

RM: Well, if I was looking at categories, I’d say another one is, what I’ve called, the opportunity cost and by that I mean they might have the capability, they might have availability but, for some reason, they’re looking at, maybe, several projects and they haven’t got enough capability or enough availability to do several projects. So, they’ve got to decide what’s the best use of their in-house team. And quite often, this can be in a number of areas. It can be for a vital project, where the intimacy with their business environment is essential for the fastest possible results. So, they want to use their in-house team. It could be for IP reasons or secrecy, where, maybe, they’ve got a disruptive idea that they think is a competitive advantage, so, they perhaps don’t want to share that very much with a partner. So, those are some of the reasons I’ve seen, which I’ve called opportunity cost and again, that’s often one of the biggest drivers actually. Another area that I would look at is something I’ve called disruption. Now, this is a bit more interesting, in the sense, I wouldn’t quite know what the word is that I should use. But, I have definitely had many, I’ve had several examples where an IT director has called me in and talked to me, quite openly, about the fact that he has a failing IT department, for lots of reasons. One of them I’ve already mentioned. They’re spending most of their time on the least interesting work which is just keeping the lights on and, perhaps, their motivation levels, perhaps their incentive to learn new methodologies or technologies just hasn’t helped them to grow the dynamics of that team. So, what he wants to do is to, either, use a new project or a prototype to just demonstrate what good looks like. And I’ve absolutely known companies that have used, what can be achieved by a team of nearshore pro developers coming in to help his team get better. And that, to be honest, can be a very valuable reason for doing that. And, perhaps, the final one is the most obvious one, which is cost. I mean it would be the first one because that’s what most people think about.

JG: I think it was traditionally the first reason but nowadays, it has changed a little bit.

RM: Well, I think it has and that’s why I didn’t put it top of my list because, I mean, when people think outsourcing, the first thing that comes to most people automatically is it saves me cost. Well, yes, of course it can do. But there’s a lot of value in some of these other things that I’ve mentioned and that’s why, despite cost, people still look and should look to nearshore outsourcing.

JG: But, it all sounds brilliant when we talk about these starting projects but I imagine there are plenty of projects that are already underway. Is it possible to engage with a nearshore partner when this project is already on track?

RM: Oh, absolutely! And in fact, I, personally, have, in many examples, where a project for some reason has been failing, fallen behind schedule, perhaps, they’ve realised they don’t have some of the skills that are necessary and yes, of course, that may be the ideal opportunity to introduce an offshore partner. You know, the whole basis of the team that comes with a nearshore partner is that they have the team dynamics already built in and they’re a faster start option for many companies.

JG: So, I think that is also a challenge for IT suppliers because they need to be able to work with plenty of people on the client’s side, with different teams etc. Probably, even different suppliers.

RM: It’s one of the qualities that you look for in your team. I mean, not only do you have to be technically excellent, but you have to have the communication skills, the learning capability to be able to fit in very quickly. That’s why you’re good at what you do. You know, it’s not just technically capability and, in fact, quite often, that’s just the hygiene factor, it’s all these other factors, your ability to integrate into the team, to pick information quickly, to ask questions and make sure your comprehension is clear. All of these things are necessary to make sure that your onboarding is as fast and efficient as possible.

JG: All right Ross, so to sum it up, the five points are?

RM: So, the five points I’ve used, in no particular order, are capability, availability, opportunity cost, disruption and cost.

JG: All right, thank you very much for that conversation Ross. And thank you, the viewers, for watching this episode of IT Leadership Insights by Future Processing. If you’ve found that useful, please share it and recommend it to your friends and colleagues and drop us a line with the topics that you would like us to cover in the next episodes. Once again, thank you and see you next time.